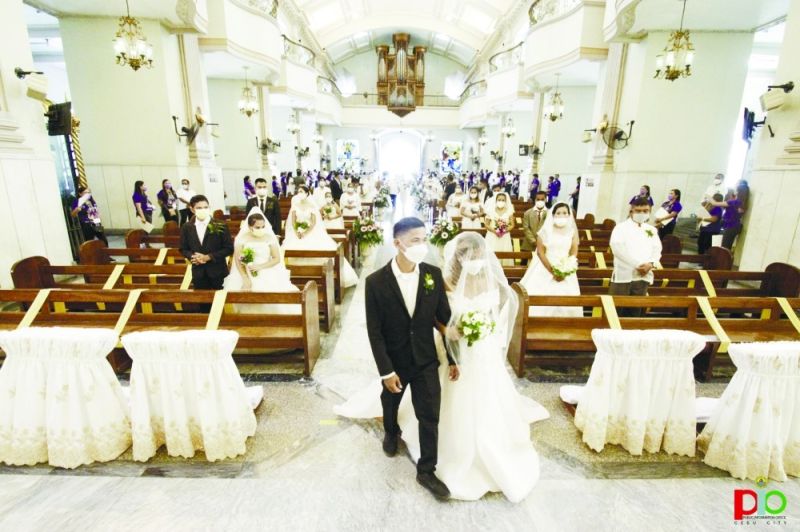 DESPITE the dangers the Coronavirus (Covid-19) pandemic has caused to the population, this has not stopped 150 couples from Cebu City from expressing their undying love for one another.

The 150 couples were formally married in a mass wedding hosted by the Cebu City Government.

The mass wedding, the 14th hosted by the city, took place at the Cebu Metropolitan Cathedral on Tuesday morning, September 21, 2021.

But with so many couples marrying at the same time, city authorities have had to ensure the mass marriage meets minimum health protocols to prevent the spread of Covid-19.

Cebu City Councilor Prisca NiÃ±a Mabatid, who chairs the City Council’s Committee on Women and Family Affairs, said to comply with health protocols they had to divide the 150 couples into four lots to ensure that the social distancing protocol is respected.

The first batch, made up of 32 couples, got married on Tuesday, September 21.

Mabatid said that in addition to the venue, the city also endorsed wedding rings for couples and their receptions.

The couples also received free lechon, a bag of rice and a cake donated by the City, she added.

Cebu City Mayor Edgardo Labella and Deputy Mayor Michael Rama were supposed to serve as godparents for the couples, but the two officials were not present at the ceremony.

After the wedding, the newlyweds were taken to Fort San Pedro where the reception took place. (JKV)

5 reasons why Baha Mar is an exceptional wedding destination