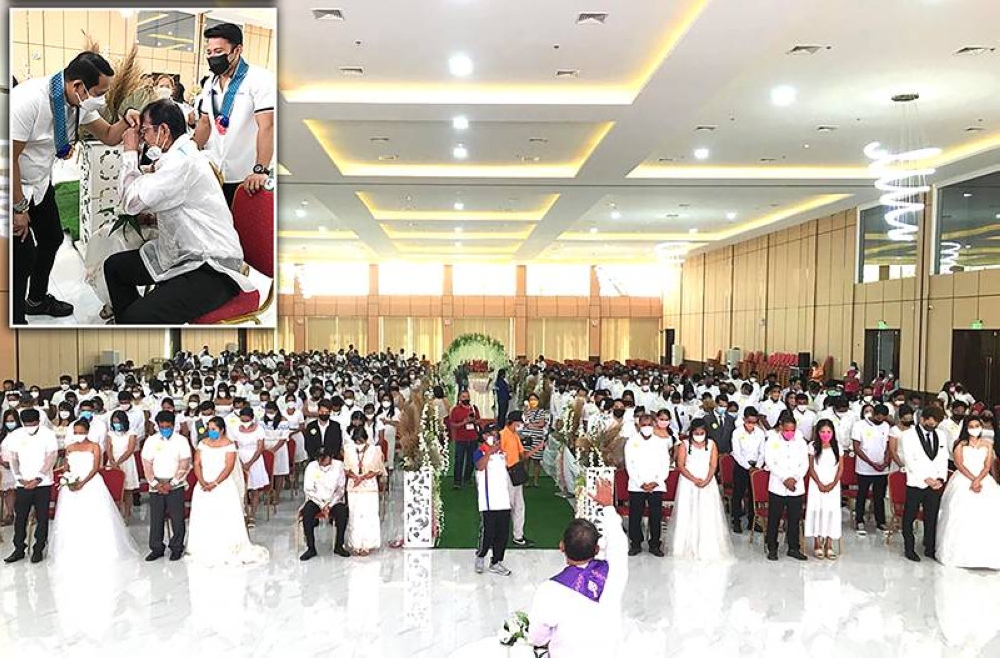 BLESS US, NINONG Godfathers Bulacan Gov. Daniel Fernando and Board Member Alex Castro (inset) congratulate Ponciano Tiglao, 94, and Valeriana Tinio-Tiglao, 70, who were married on Sunday, February 27, 2022 at the City of San Jose Convention Center Del Monte. A total of 210 couples were married during the “Kasalang Bayan” sponsored by Fernando and Castro. PHOTO BY FREDERIC SILVERIO

A 70-year-old bride and her 94-year-old fiancé were among 120 couples who tied the knot on Sunday, February 27, in the “Kasalang Bayan” mass wedding ceremony held at Barangay Sapang Palay and Fatima 5.

Among the couples who married were Lolo Ponciano Tiglao, 94, and Lola Valeriana Tinio-Tiglao, 70, both of Barangay Gaya-Gaya, City of San Jose Del Monte (SJDM).

The couple, widow and widower, have decided to marry after 31 years together.

In his message at the mass wedding held at the San Jose Del Monte City Convention Center, Fernando said he was not in favor of divorce in the country as he emphasized the sanctity of marriage.

After the ceremony, the Governor proceeded to Barangay Fatima 5, also in SJDM, where he witnessed the wedding of 90 couples.

Fernando and Castro were also the main sponsors.

On Monday, February 21, some 210 couples were also married administered by Norzagaray City Mayor Alfred Germar at a Kasalang Bayan where Governor Fernando and Castro were again guests and main sponsors.

How to Break into Destination Wedding Videography