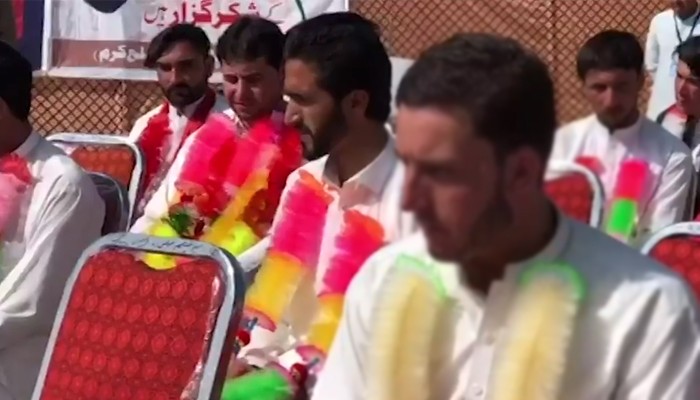 KURRAM: About 50 couples were married in a mass wedding in the Kurram district of Khyber Pakhtunkhwa’s Kohat Division, with the joyous event taking place at the Parachinar Eidgah – an outdoor enclosure.

Tribal leaders and local figures from across the district participated in the event, alongside the Pakistani Army 73rd Brigade Commander, many officers from the forces, families and relatives of the bride and groom and others. members of civil society.

â€œWe are very happy to be married,â€ said one groom.

“We had been engaged for several years but were unable to organize a wedding due to poverty.”

According to one of the attendees, some of the total 50 newlyweds had been waiting for almost 10 years to get married after their engagement.

â€œThey couldn’t have a real weddingâ€ because of the rising costs, said a guest at the wedding.

Tribal leaders stressed that even securing two full meals a day was a challenge amid uncapped inflation that was hurting wage earners and middle-income families across Pakistan.

â€œIn this age of soaring prices, organizing mass weddings is a laudable endeavor,â€ they said.

Organizers noted that clothes, cooking utensils and rugs, among other necessary household items, have been handed over to the newlywed couples.

“If they decide to go and create their own house, they won’t have to buy anything in the bazaars themselves, but they will have a well-appointed house for themselves,” organizers said.

To date, some 5,000 couples have married in such mass marriages, they said.

Local leaders insist that mass marriages must now continue, bearing in mind the importance of marriages and the underdevelopment of their regions.