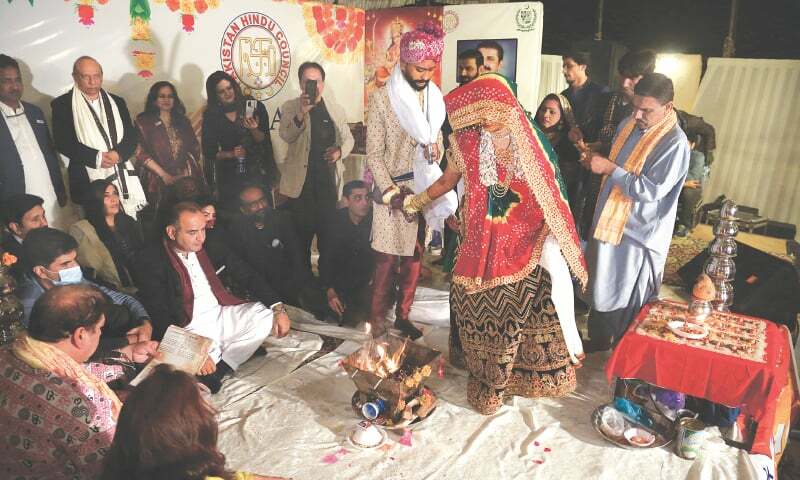 72 Hindu couples are married in a mass wedding in Karachi, Pakistan

KARACHI: Up to 72 Hindu couples were married in a mass wedding ceremony organized by the Hindu Council of Pakistan (PHC) at the Railway Ground here on Sunday evening.

Every year for the past 14 years, MP Dr. Ramesh Kumar Vankvani, who is also the chief patron of the PHC, has organized mass weddings for poor Hindu couples who cannot afford a large wedding on their own.

The couples in their wedding finery reached the ground in the afternoon and waited seated in 10ft by 10ft wide enclosures, or mandap as they are called, in two long rows inside a huge white tent. They were there with their parents, their brothers and sisters, their families. In front of the huge marquee was a scene where the model couple was to get married and which the others in their enclosures were to follow step by step, watching on two large screens placed on either side of the aisles.

Most of the couples had come from Sindh. There were couples from Tando Allahyar, Mithi, Mirpukhas, Hyderabad, etc. There were also many who belonged to Karachi.

Laxman wore a heavy mirrored triangular crown on his head as he sat next to his bride to be Mehek in her pretty golden wedding dress. Laxman’s mother said it was her family’s first marriage as he was her eldest son. Meanwhile, Mehek’s sister sitting next to her informs that everyone from their side is already married as Mehek is the youngest in their family.

Laxman said he was happy that such a mass wedding could be held for people like him. “I work as a packer in a mobile phone company in Korangi. If he had been left to me, I would have had to wait several more years to save up and get married,” he said.

Vickey and Nandni belonged to Ibrahim Hyderi. Vicky said he worked as a sweeper at the Karachi Metropolitan Corporation. “We have been engaged for three years. I tried to save up since our engagement but it wasn’t enough. Eventually we decided to get married in a mass wedding,” Vicky said.

Nandni’s mother had her youngest child, five-month-old Krishan, on her lap. Her eyes watered when someone said the bride was going to miss her baby brother. “But that’s life. Girls have to leave their parents’ house. I’m going to miss my daughter too, we all will,” she said.

Soon it was announced that they were going to start the wedding. Mahraj Pandit Jai Kumar Trivedi began preparing the sacred fire around which the model couple were to do seven circumambulations. He explained that during the circumambulations or sphere, as they are called, three times the bride is in front of the groom, then four times the groom takes the lead, after which he applies traditional sindhoor or red powder in the part of the hair. and on his forehead as he puts the mangalsutra or the sacred thread around his neck.

Other rituals include the reading of the mantra by the pandit, the lighting of incense sticks and the feeding of ghee in the fire with the breaking of coconut.

Sunil and Sapna were the lucky couple called from the number one mandap to take the stage as model grooms and brides. Suddenly, all eyes were on the very aware groom in shimmering white sherwani pajamas and brown churidaar. He also held a sword to protect his beautiful wife in a black and gold saree with a red and green chunari on her head. She sat next to him, her eyes looking down pensively and her henna-decorated arms with gold bangles delicately crossed in her lap.

After the wedding, each couple received pure silver jewelry, dishes, pots and utensils, and a check to help them start their new lives.