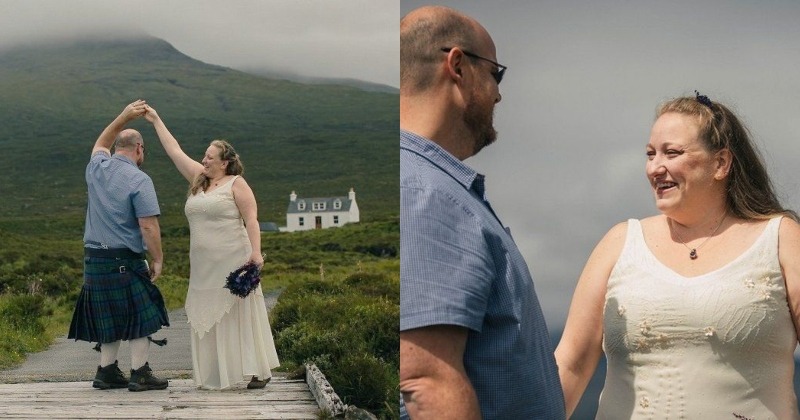 An American couple planned to get married on a scenic island in Scotland and cherish the memories forever. They had traveled 6,400 kilometers from the United States to the Isle of Skye to get married.

Everything seemed perfect for American couple Amanda, 40, and Paul, 37, until they landed in Scotland to find all their luggage was missing. The missing bags meant they were without their outfits for their big day. And because of this, they began to consider calling off the wedding.

The nightmare began when their flight from the United States was delayed and rerouted, Amanda and Paul Riesel arrived three days after their scheduled arrival and just one night before their big day.

“We didn’t know the luggage hadn’t arrived until we were in Inverness,” said Amanda, who had luckily carried the wedding rings and flowers in her hand luggage. “We arrived at the baggage carousel to find it was completely empty and our bags weren’t there. I understood we had to cancel and there was nothing else I could do.

Their photographer appealed to locals for help

The couple had spent over £12,000 on the trip they had been planning for over two years. And now they were ready to call off the whole wedding until Amanda’s photographer, Rosie Woodhouse, appealed to locals to help the couple – with just hours to spare.

Within hours, Amanda was offered a selection of eight wedding dresses in her size, and Paul, 37, was offered a kilt. A kilt is a type of unbifurcated knee-length men’s dress skirt with pleats at the back, originating in the traditional dress of Gaelic men and boys in the Scottish Highlands.

The bride-to-be managed to get her makeup done at a local chemist and had luckily carried the wedding rings and flowers in a hand luggage.

In another kind gesture, photographer Rosie even invited the couple back to her friend’s house for a meal due to most restaurants in the area being closed.

“Rosie did all of this, I was oblivious to all the work that was going on in the background,” Amanda said. “In the middle of the night people responded, one woman even dropped off normal clothes to help. We woke up with this beautiful thing orchestrated for us. Thanks to her perseverance, we got married.”

Photos from the special wedding are now winning hearts on social media. The kindness and support of these islanders towards the American couple, who wanted to achieve their goal of getting married in the Highlands, is what made the “imperfect” marriage so remarkable. A photo was shared by a user named Grouse Beater on Twitter on Friday.

Amanda and Paul Riesel planned a wedding in Skye for two years, but their flight from the United States was delayed; they arrived the day before their wedding with their luggage missing. The islanders have clubbed together and found them equipment! All’s well that ends well. (Photo RW) pic.twitter.com/vyjDOLmzSm

Although the wedding was not as dreamy as they thought, they will remember this day for the rest of their lives. “Everyone that Rosie introduced us to and offered to help will forever have a place in our hearts,” the elated Amanda said.

“The people of Skye will be famous in Orlando because we will tell everyone who will listen that they are the reason our love was cemented on a perfectly imperfect wedding day. We will never have enough words to express to how grateful we are.

For more news and current affairs from around the world, please visit Indetime News.