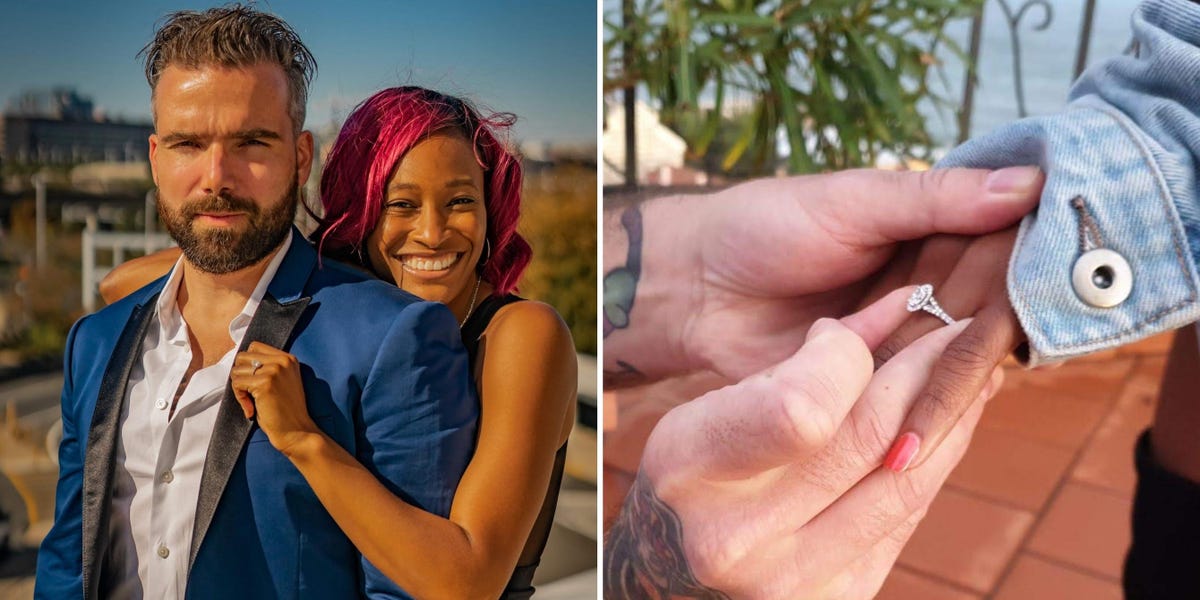 But long before their global adventures, the couple said they met in a JFK airport terminal in 2018, unaware that they would be sitting next to each other on a flight from New York to Los Angeles and would fall in love before landing.

When asked how they met, Solberg, a nomadic digital marketing professional now working in New York, said there were “two sides to the story.” Burton, a dancer in Germany, jokingly added: “Mine is the most accurate side. I know you think yours is – it’s not.”

Solberg said he didn’t know Burton when he sat next to her in the terminal on his way to a family wedding. Burton maintained that her now fiancé deliberately invaded her space in a quiet waiting room to talk to her as she returned home to Los Angeles after an audition callback.

After seeing Solberg’s ticket, Burton said, she noticed he was part of her boarding party, but he got on the plane long before. “Wow, no spatial awareness, and he doesn’t follow the rules? Who does he think he is?” she said she was thinking of Solberg.

All of that dissipated when the couple realized they were sitting together on the Alaska Airlines plane. “We were stuck on the tarmac for about an hour, and I was excited to talk to him,” Burton said of the six-hour flight, which lasted eight hours with delays.

Other conversations about spirituality — Solberg is Jewish and Burton was raised Catholic — family, work and travel allowed them to quickly establish common ground, they said, as well as the complementarity of their differences.

As soon as they got off the plane, the couple exchanged numbers and a kiss on the cheek from Solberg, who said he texted his brother saying, “I just met the girl of my dreams. “

A few days later, the couple got a three-hour call that Burton said she normally would hate, and Solberg drove to Los Angeles and stayed at a cabin in Topanga Canyon. The couple said they had a “date marathon” from there, including a trip to the Malibu beach, dinner at the cottage and brunches.

When it was time for Solberg to fly back to New York, they spontaneously decided that Burton should fly back with him if there was an available seat on the flight. As fate would have it, the seat next to hers was free.​​

“We hung out in New York for a few weeks and then she was like, ‘Career before men,'” Solberg said, adding that Burton then left to audition for Paula Abdul.

The couple said they don’t place a high value on remote work. “I think we had to know somehow that it wouldn’t be a long distance forever,” Burton said.

Solberg and Burton have since traveled the world together

In addition to visiting each other, they have visited many places together, including Mexico, Saint Thomas, Greece, Florida and Las Vegas. In August 2019, the couple began documenting their travel experiences as an interracial couple on Instagram and Youtube.

“There are a lot of uncomfortable conversations and situations that you have to deal with,” Solberg said of his overseas privilege, adding that he would notice “ignorant” microaggressions, such as agents in the trains verifying Burton’s identity but not his own.

In October 2019, the couple traveled from Las Vegas to Italy, where they got engaged. The proposal didn’t really come as a surprise, but Burton didn’t know when to expect it, she said. “We had already decided on a wedding venue even before we got engaged. We even looked at the rings,” Burton added.

Burton said yes to Solberg’s Italian proposal on the rooftop with a personalized diamond ring, and the couple quickly agreed on a destination wedding. They decided early on to get married in Saint Lucia on July 25, their anniversary, but due to COVID-19 they experienced delays to the intimate 40-person ceremony they planned to have at the Windjammer. Landing Villa Beach Resort.

Although their wedding date remains uncertain, the couple know one thing: their honeymoon will involve more sunshine and will be split between Indonesia and Hawaii.