GANDER, NL – Bronwyn and Jason Harrell had only been dating for about a month in 2019 when they first dressed up and went out on a date.

The couple live in Greer, South Carolina. Bronwyn has worked in professional theater as a stage manager and sees every show she can, but Jason had never seen a live theater production.

So she arranged for them to go to the Peace Center in Greenville, South Carolina, to see “Come From Away.” 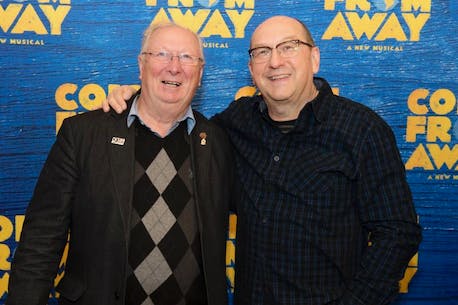 The play documents the events of 9/11, when thousands of Americans fled to the town of Gander, and how residents of the town and surrounding areas rallied together to ensure they were well taken care of.

“That was what was going around town. It was pure coincidence,” she said in a chat with the SaltWire Network from her home in Greer. “I really wanted him to see a show with me.”

The two left the theater amazed and immediately started talking about how they should visit Gander. But the COVID-19 pandemic hit before that happened.

Fast forward a bit and the couple – who met on Tinder and said they weren’t looking for marriage – were engaged and making wedding plans.

They were thinking of going on a cruise with their families or going to Las Vegas, but neither seemed entirely right or meaningful to them.

“And it was like, well, we still really want to go see Gander.”

Thus, Bronwyn began researching the possibility of getting married in the city. Along the way, it was suggested that Gander International Airport would be a cool place.

“It seemed like the perfect place to experience something different,” she said.

When she contacted airport general manager Reg Wight, he said the airport would like to have them.

“And things kind of fell into place.”

The trip was a little advanced and the couple traveled to Newfoundland on April 4. They got married in the airport’s international lounge on April 8.

“And it was just wonderful. I can’t even describe what an amazing trip it was,” Bronwyn said.

The ceremony, likely a first for the airport, was performed by Geoffrey Tucker, a local marriage commissioner, with photographer Shawn Taylor and his assistant for the day, Samantha Kearley, on hand to document the theatre-themed affair. Natasha Pearce, who helped organize everything at the airport, was also present.

Bronwyn wore a black dress embellished with 1,440 hand-glued crystals by her friend Susan Hennessey and carried a bouquet of wooden flowers.

“I’ve always been kind of unique,” she said of her dress choice. “A white dress just didn’t fit me.”

And the choice had a theatrical connection.

“Directors wear black because we move in the shadows.”

As for flowers, Bronwyn couldn’t travel with real ones and isn’t a fan of silk. Being sentimental, she wanted to keep her flowers. The wooden ones, which are starting to become a trend in the United States, ended up being the perfect option and could be considered a kind of theater prop.

The ceremony was followed by dinner at the Albatros, then off to the Royal Canadian Legion.

“And to top it off, we were invited by Beulah (Cooper), Oz (Fudge) and Brian (Mosher), who are three of the character inspirations for ‘Come From Away’. That was probably the highlight of the trip. Bronwyn said, excitement still fresh in her voice.

“They were just the nicest people. It was so much fun. They made us laugh. They were the most genuine people. They’re so open with their story. They’re such nice, generous people.

“It was wonderful. It was so special that they were the ones involved,” Bronwyn said.

A “Come From Away” Connection

She credits Pearce, who suggested she call the local branch of the Royal Canadian Legion about the incident, for helping her make the connection, because when she did, she was told to call Beulah.

Harrell hoped it was “the Beulah”, and to find out that it was his day.

“I said to him, ‘believe it or not, you get an added bonus: the three of us who do the screech-ins are involved in ‘Come From Away,’ Oz, Brian and myself,” Cooper said. about the conversation she had with Harrell.

Together they drew around 1,000 people, but Harrell’s wedding was a first for them.

“I was surprised that they decided to run away here because I had never heard of this before, but when I thought about it I was not surprised because a lot of people learned a lot from Gander. And people are so in love with Gander and the people here and how kindly they have been treated,” she said.

“When I first heard that they (the 9/11 passengers) were coming to Gander, the first thing I said was, ‘Thank God they’re coming here.’ I’m not saying they wouldn’t be taken care of elsewhere, but I knew that coming here would definitely be taken care of, and they were.

Documenting the entire experience, Taylor, a Clarenville-based photographer and owner of Wedding photography by Shawn Taylor.

He moved from Niagara Falls to Newfoundland in 2019 and has photographed nearly 600 weddings over the past 17 years.

“I’ve never photographed anything like this before and it’s always nice to be able to work with couples who are unique and doing their own thing,” he said.

Harrell and Taylor started talking about his plans about a year ago.

“And I was immediately interested. Newfoundland is probably the best place in the world to run away, but not everyone comes to run away in April.

As Taylor learned more about Bronwyn’s story, as well as her dress and flowers, he grew more enthusiastic.

“And I was like, this person is amazing, like she was doing exactly what she wanted to do.”

The choice of venue, with a mid-century modern style that is all the rage for weddings and bridal calls, was nothing short of fantastic in the photographer’s opinion.

“It’s Gander. It’s a unique place to go and I hope it’s not my last wedding that I will be able to photograph there.

During their week in the province, Bronwyn said she and Jason experienced great hospitality wherever they went. In Gander, she says, people were touched to want to include them so prominently in their own lives.

Leaving was hard to do, she says, but they are already planning to return.