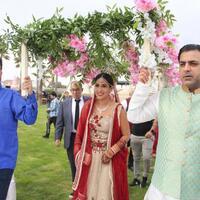 The destination wedding market in Turkey is expected to pick up next year with strong demand from India, Pakistan and Russia, people in the industry have said.

The ongoing COVID-19 pandemic has hit major events, such as fairs, conventions and weddings, over the past two years across the world.

However, as countries vaccinate their populations as well as other measures taken against the virus, more and more events of this type are expected to be held next year, with Turkey capturing a significant share in the market in particular. destination weddings, they said.

The number of tourists visiting Turkey is increasing, however, when Turkey starts hosting more of these events next year, they will greatly contribute to the country’s tourism income.

Destination weddings in Turkey are expected to increase significantly in 2022, as the depreciation of the Turkish lira makes the country more attractive to the organizers of these events and the high-quality services on offer, according to people in the industry.

There is a high demand from Russia, India, Pakistan, Lebanon, Iran, Afghanistan and countries in the Middle East, said Heval ZengoÄŸlu, who recently organized the Wedding fair. Dream Art.

Turkey has always hosted such events for years, however, they have almost come to a standstill due to the pandemic, but Turkey will again be the rising star of destination weddings next year, ZenoÄŸlu said.

Foreigners especially want to get married in Istanbul, Antalya on the Mediterranean coast and the popular holiday destination Bodrum, according to ZengoÄŸlu.

Preparations are underway for dozens of wedding events already booked, she said, noting that wedding planners are now focusing on traditional destinations, such as Italy, the United States and France. , to Turkey, according to ZenoÄŸlu.

“Istanbul is now the second favorite destination after Los Angeles,” she said.

In a speech he gave last month at the MICE & Wedding International Forum held in Antalya, Culture and Tourism Minister Mehmet Nuri Ersoy said the size of the global destination wedding market had reached around $ 300 billion, noting that this particular market grew by 10%. every year.

â€œTurkey hosts around 500 large-scale destination weddings. It attracts people not only from certain parts of the world, but from all countries. Per capita spending in these organizations is around $ 500 to $ 600, â€Ersoy said.