By James O. Maness On Oct 16, 2022
Share
Eighteen couples were married in a mass wedding on October 15 in Hanoi. (Photo: VNA)

The event was co-organized by the Hanoi Chapters of the Communist Ho Chi Minh Youth Union and the Vietnam Youth Federation to mark the 68th anniversary of Hanoi Liberation Day (October 10, 1954 – 2022).

It also aimed to educate the public about “new lifestyle” wedding practices that promote simple and economical wedding ceremonies that preserve traditional values. 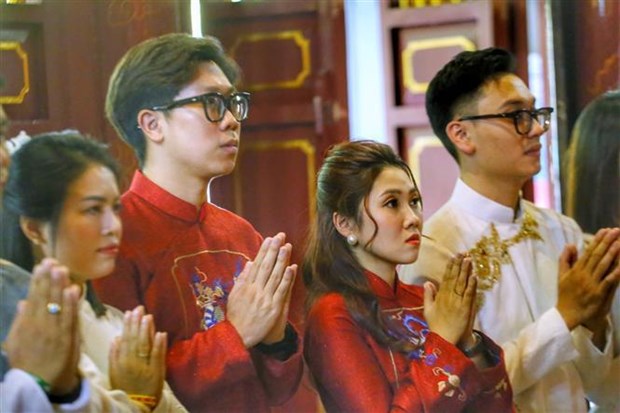 The couples offered incense and a set of two traditional Vietnamese sweet cakes – “Banh Com” and “Banh Phu The” – weighing a total of 130 kg to King Ly Thai To Monument and Ba Kieu Temple as a sign of honor for the country’s traditional cuisine. .

“Banh Comis a sweet cake made of green sticky rice and green beans and “Banh Phu The”, which means marriage cake, symbolizes the loyalty of a husband and wife and is normally served at weddings. Produced by Bao Minh Confectionary JSC, the set has been recognized as the largest of its kind in Vietnam./.