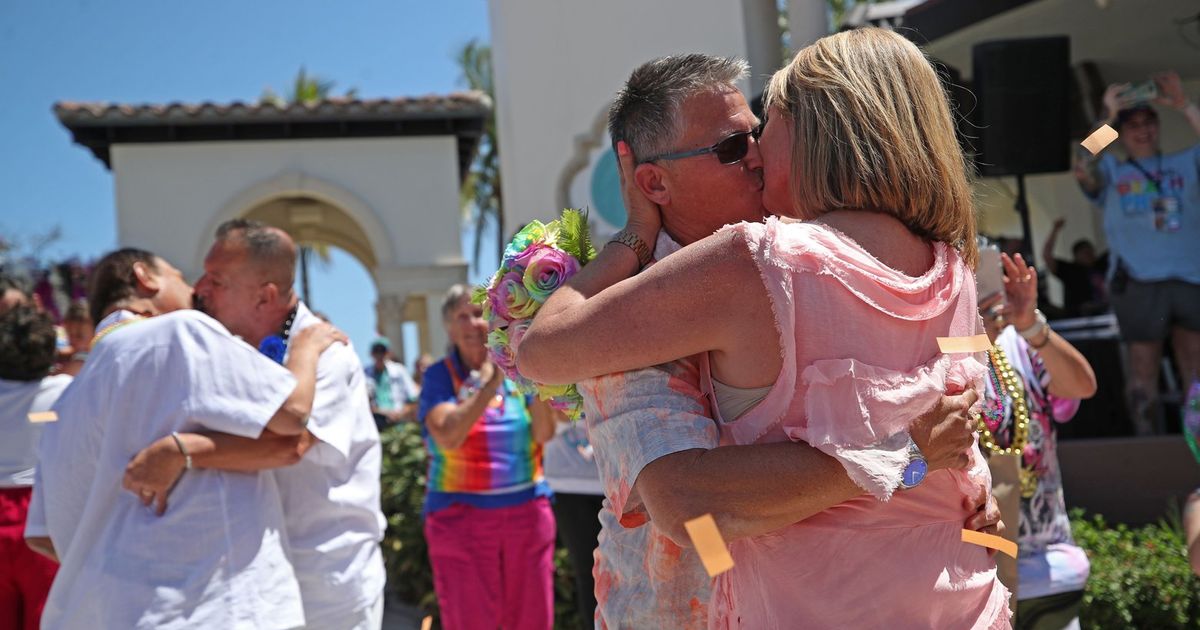 LAKE WORTH BEACH, Fla. — The message at Sunday’s Palm Beach Pride celebration in Lake Worth Beach was clear: “We say gay!”

The festival, organized by the Compass LGBTQ Community Center, began with a parade down Lake Avenue, ending in Bryant Park. There, several local and state officials spoke about gay and transgender rights in Florida, and then Palm Beach County Clerk Joseph Abruzzo performed a mass wedding of 30 couples.

“It’s really a pleasure for me to – you know what, it’s great! It’s great to be here! It’s really a pleasure for me and the whole clerk’s team to be part of this event “Abruzzo told a crowd of several thousand at the wedding ceremony. “Now it’s time to move on to why we are all here – an exchange of vows and a celebration of these wonderful couples. “

The Abruzzese asked the couples if they would love and cherish each other and bring joy to each other as long as they live. He then pronounced the 30 legally married couples.

After their first kisses as married couples, the crowd erupted in cheers and confetti rained down on the park stage.

Vinnie Primerano, 69, remarried Tony D’Amico, 69, at the festival. The couple originally married in Provincetown, Rhode Island, around 10 years ago after being together for 25 years. They talked about getting remarried in Florida and finalized that Sunday afternoon.

“It was good because it’s a whole new family for us. We’ve been here a little over 10 years,” Primerano said. “It’s always exciting when they say something like that, you know, ‘ it’s official.’ Especially with so many officials here and especially at the end of a Pride Parade.

“This is our home now. We live here and wouldn’t change that for the world,” D’Amico said.

Shih Tzu Daisy, 10, was their bridesmaid.

Among the public officials who spoke were Nikki Fried, Florida agriculture commissioner and Democratic gubernatorial candidate. She spoke about her creation of Florida’s first LGBT attorney position and urged people to register to vote and show up at the polls.

“We have a governor who is trying to divide us. It’s trying to instill fear and hatred in us,” Fried said, causing the crowd to boo. “This is what democracy looks like. We show ourselves. We tell them you won’t hold us back.“

Between Saturday and Sunday, around 30,000 people attended the parade, wedding and festival, according to Michael Riordan, marketing director for Compass.

“It’s a success in every sense of the word, especially when you consider what’s going on in Florida, politically, right now; the opposition to being yourself, to being authentic, to loving who you love. To have all these people come out in defiance of that was incredibly amazing to see.