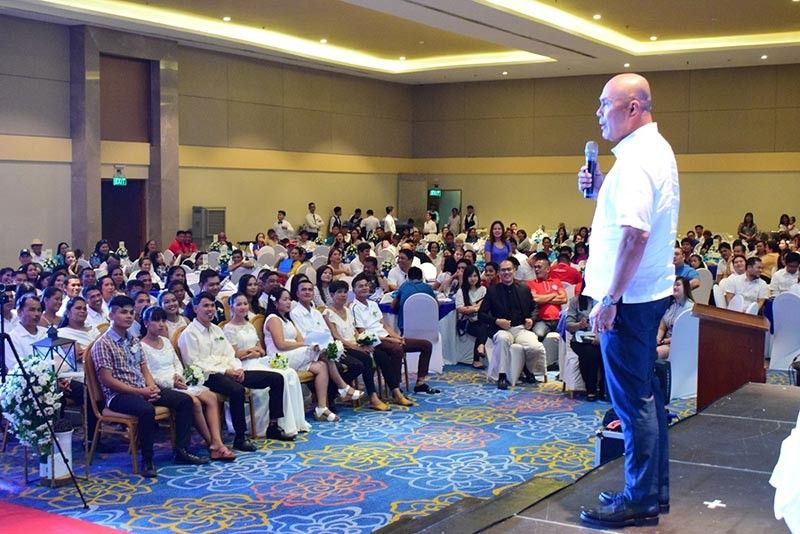 The city government of Mabalacat hosted a grand civil wedding ceremony on Monday, September 23 at a hotel in Clark Freeport.

About 53 couples exchanged marriage vows at the city’s largest mass civil wedding ceremony to date in the Royce Hotel Ballroom, hosted by the city government through its local civil registrar.

City mayor Crisostomo Garbo, who performed the wedding ceremony, said the mass wedding was made possible with the support of the city council by allocating funds for the event.

Garbo said the annual civil marriage aims to legalize the marriage of couples who have lived together for years.

“Your partnership will be legalized so that when your children need the required documents at school, you can now present them,” Garbo told the couples.

The couples were forced to walk the red carpet at the Royce Hotel, exchanged vows dressed in their wedding dresses and barongs accompanied by their respective sponsors.

The oldest couple to marry were Manny Alegri Miranda, 47, and Charlita Morta Cascara, 51, both of whom thanked the city government for the free civil marriage.

After the ceremony, the couples and their sponsors were served with meals including wine and cakes.

Deputy Mayor Gerald Aquino, along with council members and department heads, sent greetings to the newlyweds at the event.

The ten best gay marriage songs for 2019 have been revealed

Angel and Neil reveal the most romantic part of civil marriage