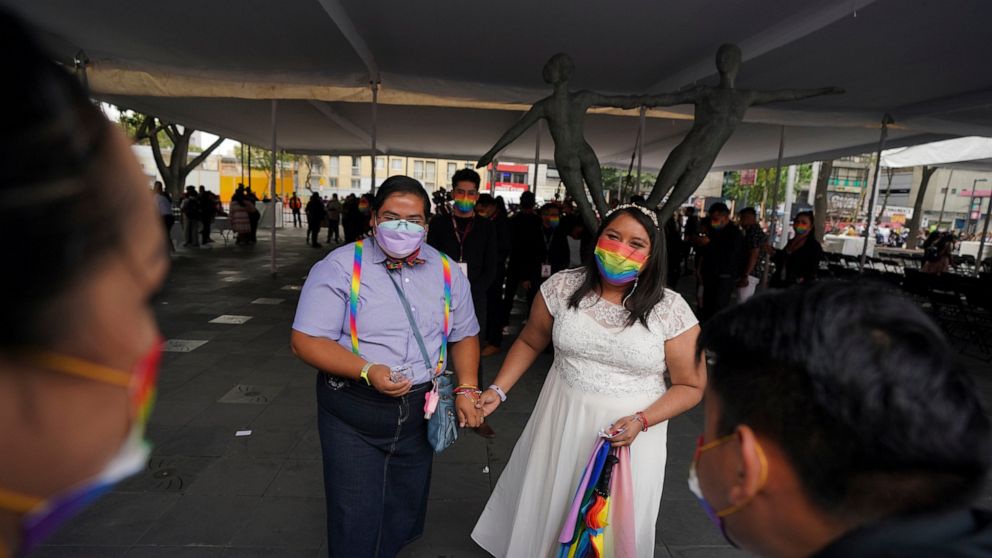 MEXICO — Even after five years together in the resort town of Acapulco, something as simple as holding hands or sharing a kiss in public is unthinkable for Dayanny Marcelo and Mayela Villalobos.

The fear of being rejected or assaulted is pervasive in Guerrero, a state where same-sex relationships are not widely accepted and one of five in Mexico where same-sex marriage is still not permitted.

But this week they traveled the 235 miles (380 kilometers) to the Mexican capital, where the city government held a mass wedding for same-sex couples as part of LGBT Pride Month celebrations. .

Under a tent set up in the capital’s Civil Registry Square, along with around 100 other same-sex couples, Villalobos and Marcelo sealed their union on Friday with a kiss as the wedding march played in the background.

Their ability to marry is considered one of the greatest recent achievements of the LGBT community in Mexico. It is now possible in 27 of Mexico’s 32 states and has been upheld twice by the Supreme Court.

Mexico, Brazil and Argentina lead Latin America in the number of same-sex marriages.

Mariaurora Mota, a leader of the Mexican LGBTTTI+ Coalition, said the movement is still working to guarantee across Mexico the right to change identity, access health care and social security, and leave minors transsexuals change sex on their birth certificates. .

While strolling through Mexico City the day before their wedding, Marcelo and Villalobos confessed to feeling strange holding hands on the streets of the city. Shows of affection between same-sex couples in the capital are commonplace, but it was hard to get rid of their inhibitions.

Villalobos grew up in the northern state of Coahuila in a conservative Christian community. She always felt an “internal struggle”, as she knew she had a different sexual orientation, but feared her family would reject her. “I always cried because I wanted to be normal,” she said.

She came out to her mother when she was 23. She thought moving to Acapulco in 2017 with a young niece would give her more freedom.

Villalobos met Marcelo there, a native of the seaside town. Marcelo, a 29-year-old store worker, said her acceptance of her sexual orientation was not as traumatic as Villalobos’, but she still didn’t come out as pansexual until she was 24. She said she was helped by Mexico City. organization Cuenta Conmigo, — Count on Me — which provides educational and psychological support.

Strolling around the capital this week with huge rainbow flags hanging from public buildings and smaller ones flying in front of many businesses, Villalobos couldn’t help but compare it to his home state and his current home in Guerrero.

“In the same country, people are very open and in another (place)… people are closed-minded, with messages of hatred towards the community,” she said.

Elihú Rendón, a 28-year-old administrative worker for a ride-sharing app, and Javier Vega Candia, a 26-year-old theater teacher, grew up in Mexico City and dating for them wasn’t that hard.

“We’re in a city where they’re opening up all the rights and possibilities for us, including doing this LGBT community wedding,” Vega Candia said, holding out Rendon’s hand to show a ring he had given her shortly before. moved in together.

When they walk the streets of the city, they are not shy about expressing their affection, sometimes hugging and dancing on a crosswalk when traffic is stopped.

“I’m happy that I was born in this city thinking that we have these rights and not in another country where we could be killed,” Vega Candia said.

Villalobos and Marcelo don’t expect their daily lives to change when they return to Acapulco as a married couple. But Marcelo said that with the marriage certificate, she would try to include Villalobos in the health insurance she receives from her employer.