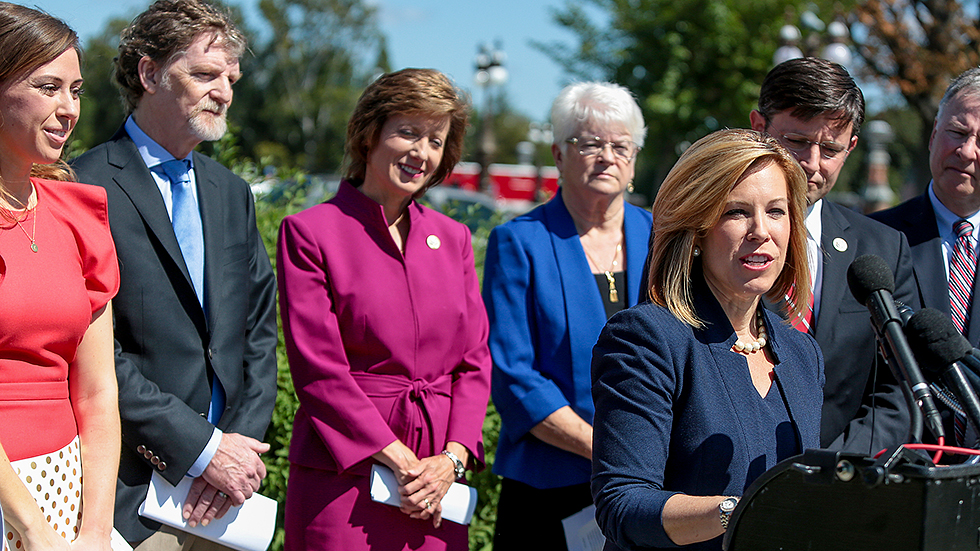 House and Senate Republicans are throwing their support behind a Colorado pastry shop owner who refused to bake a gay wedding cake in a Supreme Court case.

GOP lawmakers announced plans Thursday to send an amicus brief on behalf of Jack Phillips, the owner of Masterpiece Cakeshop.

Phillips disputes whether the state can force him to bake a cake for a gay wedding under its Public Accommodations Act, arguing that his constitutional rights to free speech and free exercise of religion are violated if he is bound to make a wedding cake for the wedding of Charlie Craig and David Mullins.

The amicus brief, which currently has 86 signatures, will be filed with the court in the coming days.

{mosads}Lawmakers say the government is trying to tell Phillips how to exercise his artistic expression and send a message that contradicts his core beliefs.

“In terms of legal doctrine, this is a case of forced speech,” Sen. Mike Lee (R-Utah), one of the co-signers, told reporters on the Capitol lawn. Thursday Morning.

“The Supreme Court said the First Amendment, in addition to doing all the other things it does, prohibits the government from requiring individuals to make a particular statement with which they disagree. The government cannot force you to speak where you would choose to remain silent. He cannot make a statement with which you strongly and fundamentally disagree. They are fundamental pillars of the American legal system and our Constitution.

Phillips, who will appear in Supreme Court later this quarter, said he lost 40% of his company and most of his staff for standing up for what he believed in.

His attorney, Kristen Waggoner, a senior adviser at the Alliance Defending Freedom, said Phillips should be able to retain her right to disagree and live according to her beliefs.

“We know that tolerance is a two-way street and that dignity goes both ways,” she said. “We must protect the right of all Americans to live and work in accordance with their religious beliefs and not force the creative professions to create visual arts that violate who they are.”

The Colorado Civil Rights Division, which is named in the lawsuit along with the couple who were denied the cake, said in memoirs that there was no discussion between Phillips and the couple about what the cake should look like.

“The petitioners did not act on the basis of the design of the requested cake or the message it might have conveyed, but on the basis of a general policy of refusing to sell a wedding cake of any kind or to a same-sex couple,” he said.