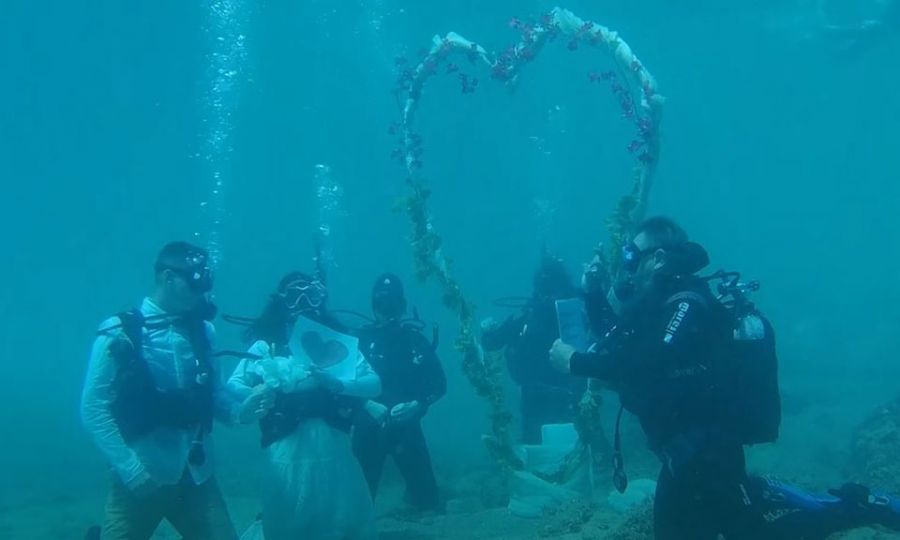 The first organized underwater civil wedding took place in Alonissos on Monday August 29 at the initiative of the Municipality.

Petros and Myrto exchanged vows of eternal love and loyalty on the beautiful seabed of Alonissos. The couple were married by the mayor of Alonissos, Petros Vafinis, who had obtained a diving license in order to perform weddings under the turquoise waters of the island.

“It’s indescribable the emotions that flood your whole being at the bottom of the sea… The underwater conditions are serene, where time stands still and the moment finally belongs to the couple”,

Present at the bottom of the sea were the two bridesmaids, the president of the Tourism Committee, Maria Agalloux, who was in charge of the wedding, as well as three volunteer diving instructors from the Triton Dive Center.

It should be noted that the whole ceremony was followed to the letter thanks to the use of special waterproof signs indicating the procedures to be followed step by step, as well as the words that the newlyweds had to say. The couple removed their masks momentarily after exchanging vows for their first post-wedding kiss.

An underwater cameraman filmed the wedding which was broadcast live on a large screen set up on the beach for guests to view, while it was also possible to watch via mobile phone.

“It’s indescribable the emotions that flood your whole being at the bottom of the sea during the wedding. The underwater conditions are serene, where time stands still and the moment ultimately belongs to the couple,” the mayor said. Alonissos at the APE-MPA after the wedding. ceremony.

“Our goal is to ‘open up’ a new market for Greece and the island. Alonissos is becoming an international diving destination that this year hundreds of divers from all over the world have chosen. Generally speaking, the island has recorded very high occupancy rates throughout the summer season, reaching up to 100% for the month of August, while tourist traffic will continue until the first decade of October,” added Mr. Vafinis.

[This article was translated from its Greek original]