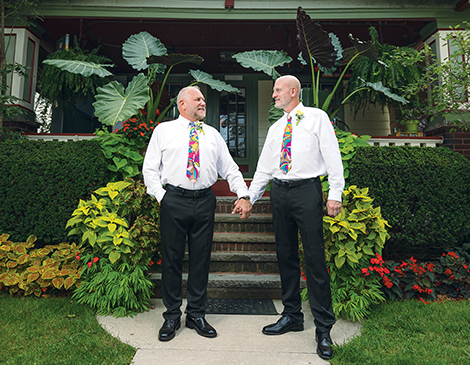 This Cleveland couple had a destination wedding in their backyard

When Ron Jaksic and Dan Burnett started dating in 2003, they discovered a wacky item of clothing they had in common: brightly colored silk ties in a swirling, psychedelic pattern from a brand called Liberty of London. Little did they know that, 18 years later, they’d be wearing these matching ties on their wedding day, a DIY Brazilian-themed affair with a 1960s Pan-American twist.

The couple, who have lived together for a decade and a half, never officially got engaged, but when the Supreme Court legalized same-sex marriage in 2015, they knew they would eventually get married.

“We finally announced that we were getting married in 2020, but COVID-19 thwarted those plans,” Dan says. “So we set a date and said we were doing this no matter what.” They canceled the date they had originally set and instead decided to use the time spent in quarantine to plan something very special – and more laborious.

“When we started thinking about the different parts of our special day, the thing that really upset Ron was when I said, ‘Let’s build a [Boeing] 747 in the driveway,” laughs Dan.

“But I know how creative he is,” Ron adds happily, “so I knew he could pull it off.”

Thus began the process of building a full-size replica of an airplane cabin, from the seats to the fuselage.

“Before we started, we thought about the different elements of how the day would unfold,” says Dan. “Basically, we wanted to start with an airport and end with a ceremony and dinner in Brazil. ”

Their wedding invitations were made in the style of airplane tickets, with guests divided into three groups; each represented a flight departing at a different time. Every half hour, groups of passengers — er, guests — arrived at the couple’s Cleveland home, starting at the front door, where a smiling duo in Pan Am uniforms (Dan’s high school friends) acted as ticket agents. The lounge was transformed into a first-class lounge, where a bartender (Ron’s nephew) served cocktails made from miniature airline liquor bottles – with Pan Am stirrers purchased on Etsy and napkins printed with the company logo.

As each group’s boarding time arrived, they crossed the kitchen-turned-skywalk and boarded Dan and Ron’s homemade plane. The couple’s nieces, dressed as flight attendants in vintage-style uniforms, led everyone to their assigned seats, which were made of flea market chairs and foam core, with backs of accordion style creating back pockets and cut-out pool noodles serving as headrests. Instead of the captain’s announcements, the couple shared a short video about their potential flight path, complete with YouTube footage of a real plane landing in Rio de Janeiro. 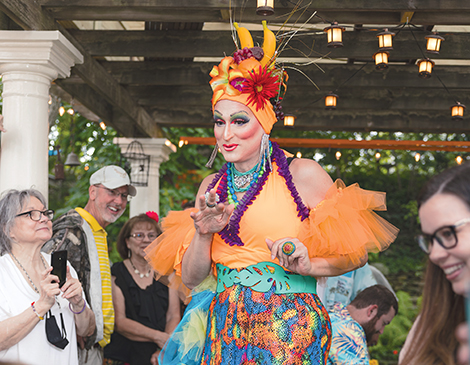 | “We made it as real and authentic as possible,” says Ron. “Everything was so interactive and entertaining for people.”

At the end of the flight, passengers disembarked in the backyard, where they sipped caipirinhas, a traditional Brazilian drink made from cachaça, a distilled alcohol made from sugarcane juice. Ron’s succulent garden work was grown especially for the day: elephant ears, palm trees, castor oil plants and an arbor made of passion vines and hyacinths. And after all their guests arrived, Dan and Ron set out to get married.

“People were cheering and clapping as we walked down the aisle, which really caught us off guard,” Dan says, “but I guess they were already a little tipsy. That made it more fun!

But the crowd fell silent during the ceremony itself, during which the couple paid their respects to departed loved ones, exchanged matching rings and recited vows they had written together. Dan is Protestant and Ron is Catholic, but instead of going the traditionally religious route, they asked Ron’s nephew to be the officiant.

“It was very witty, very special,” Dan says, “and it was very traditional — just with two guys.” One thing they hadn’t planned was a flyover of the Air Force Thunderbirds at the start of the ceremony, but it seemed to fit the theme. 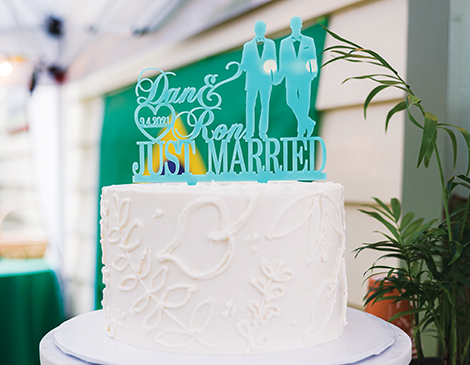 After dinner and more time to mingle, the pair joined in the mother/son dance with Dan’s mother, Marilyn, for Schitt’s Creek rendition of Tina Turner’s classic “Simply the Best.” And just when guests thought there were no more surprises in the night, the couple showed they had a few tricks up their sleeves.

Suddenly, their friend Veranda L’Ni, one of Cleveland’s most iconic drag queens, burst onto the stage dressed as Carmen Miranda — or, as she dubbed herself for the night, “Carmen Veranda.”

“For the majority of our family members, it was their first time seeing a drag queen,” Dan says. “Everyone booed and hollered and respected her and had a blast.”

And she was not the last surprise of the evening. As the DJ put on the music, Dan turned to his guests and said dramatically, “I wish there was more room to dance!” At the cue, the garage door opened to reveal a fully decorated dance club, disco ball and all. The bride and groom and their guests danced the night away, stopping it around 10 p.m.

Now finally married, the couple say married life is almost exactly the same as it has been for two decades. But it means something special to them to have their love legalized.

“I can finally say he’s my husband,” Dan says. “Vocalizing that is really special and important.”

These stars will attend the destination wedding of Mouni Roy, Suraj Nambiar, Check Out –

A destination wedding style for every couple