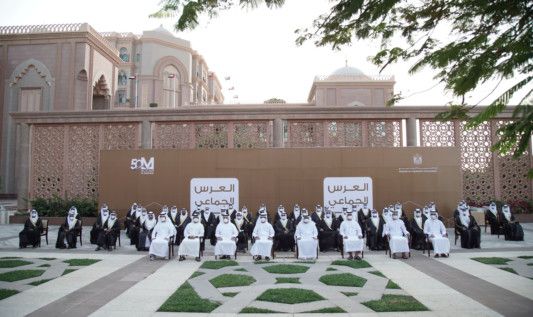 Abu Dhabi: Coinciding with the 50th year celebrations and initiatives, the Ministry of Community Development (MOCD) organized a mass wedding for 50 Emirati newlyweds, sponsored by the Al Masaood Group.

This mass wedding is part of the ministry’s vision to embody social responsibility and build effective community partnership with all parties, including the private sector, to support the organization of mass weddings for young people who want to get married. It is also meant to encourage the marriage of Emirati men with Emirati women, which is also one of the important goals promoted by mass marriages.

Ismail congratulated the young people who participated in the mass wedding, wishing them happiness and success in forming new families, taking care of them and protecting their family members. He appreciated Al Masaood Group’s initiative to organize this mass wedding, its keenness to strengthen community partnership and its active role in promoting social development in the UAE and preserving the stability of the Emirati family by sponsoring this mass marriage.

He said the Ministry of Community Development is keen to organize more mass weddings across the country each year, in a way that embodies the values ​​of solidarity and principles established by the late Sheikh Zayed bin Sultan Al Nahyan and supports the vision leaders. and government to ensure stable family life and a cohesive society.

Al Masaood said: “We are honored to be leading the way in supporting this mass wedding for 50 Emirati men and women in Abu Dhabi. These kind of mass weddings support the process of building a country that has been at the vanguard of all nations. He said the organization of the mass wedding was in line with the country’s approach to lessen the burden of marriage on our young people who remain true to Emirati traditions.

“Celebrate the wedding far from extravagance”

He added that such kind of weddings embodies the spirit of solidarity, unity and brotherhood. He urged Emiratis to “celebrate the essence of marriage away from extravagance and waste, in a friendly and convivial atmosphere”.

Salmeen affirmed Al Masaood Group’s support for organizing the mass wedding, which reflects the UAE’s commitment to community partnership and national responsibility to promote the idea of ​​mass weddings, given the importance its role in reducing the financial costs incurred by young people. at the start of their married life. He added that the contribution to support mass weddings reflects the principles of cooperation and tolerance in society, and strengthens loyalty and belonging to the country.

The Ministry of Community Development is keen to organize mass weddings throughout the UAE every year.