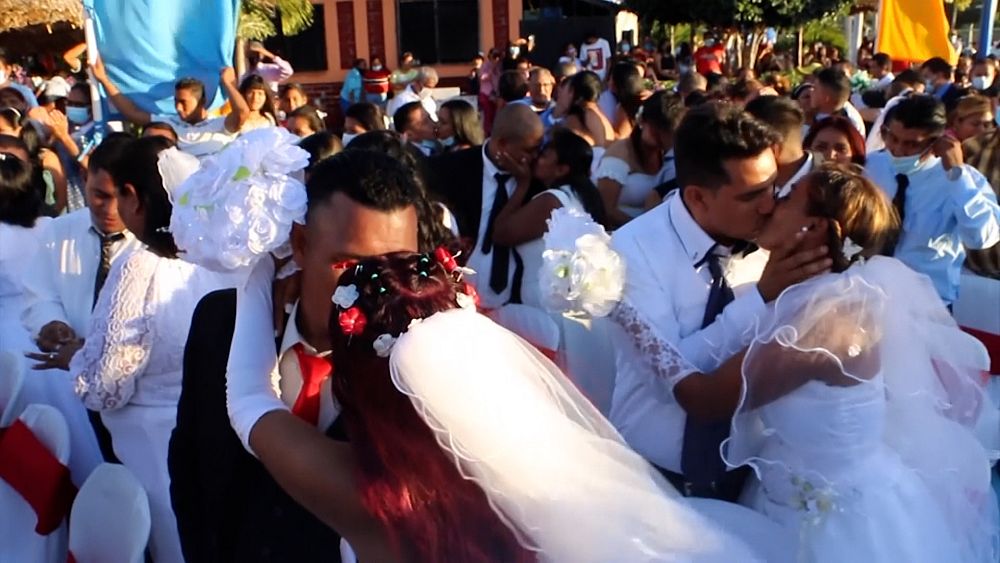 VIDEO: Mass wedding on Valentine’s Day in Nicaragua and Mexico

Under a radiant Nicaraguan sun and defying the risks of contracting the coronavirus, 400 couples married Monday in a single ceremony as part of the “mass weddings” that a local radio has organized every February 14 for 19 years.

The couples, accompanied by family and friends, gathered on an esplanade by Lake Managua to be legally married.

Some brides wore elegant white dresses with their partners in black suits and ties, an unlikely outfit for a tropical afternoon in Managua.

The event, organized by pro-Sandinista radio station Nueva Radio Ya, has taken place every Valentine’s Day in Nicaragua since 2003.

According to radio station officials, more than 10,000 couples have married in the 19 “mass weddings” held so far.

Since COVID-19 first emerged in Nicaragua in March 2020, the government has stood out by not enacting quarantines or suspending classes.

Thus, more than 600 couples get married on the outskirts of Mexico City, during a civil ceremony organized by the town hall for Valentine’s Day.

Emotional, some with tears in their eyes and almost all with a smile on their lips despite the protective masks due to the coronavirus, more than 660 couples made their love official on Monday February 14 at a collective wedding in a populous suburb of Mexico City.

The massive ceremony, which the municipality of Ciudad Nezahualcoyotl – east of the Mexican capital – has organized every year since 2013, is an opportunity for thousands of couples to regularize their unions and access various legal benefits.

Mass wedding on Valentine’s Day in Nicaragua and Mexico